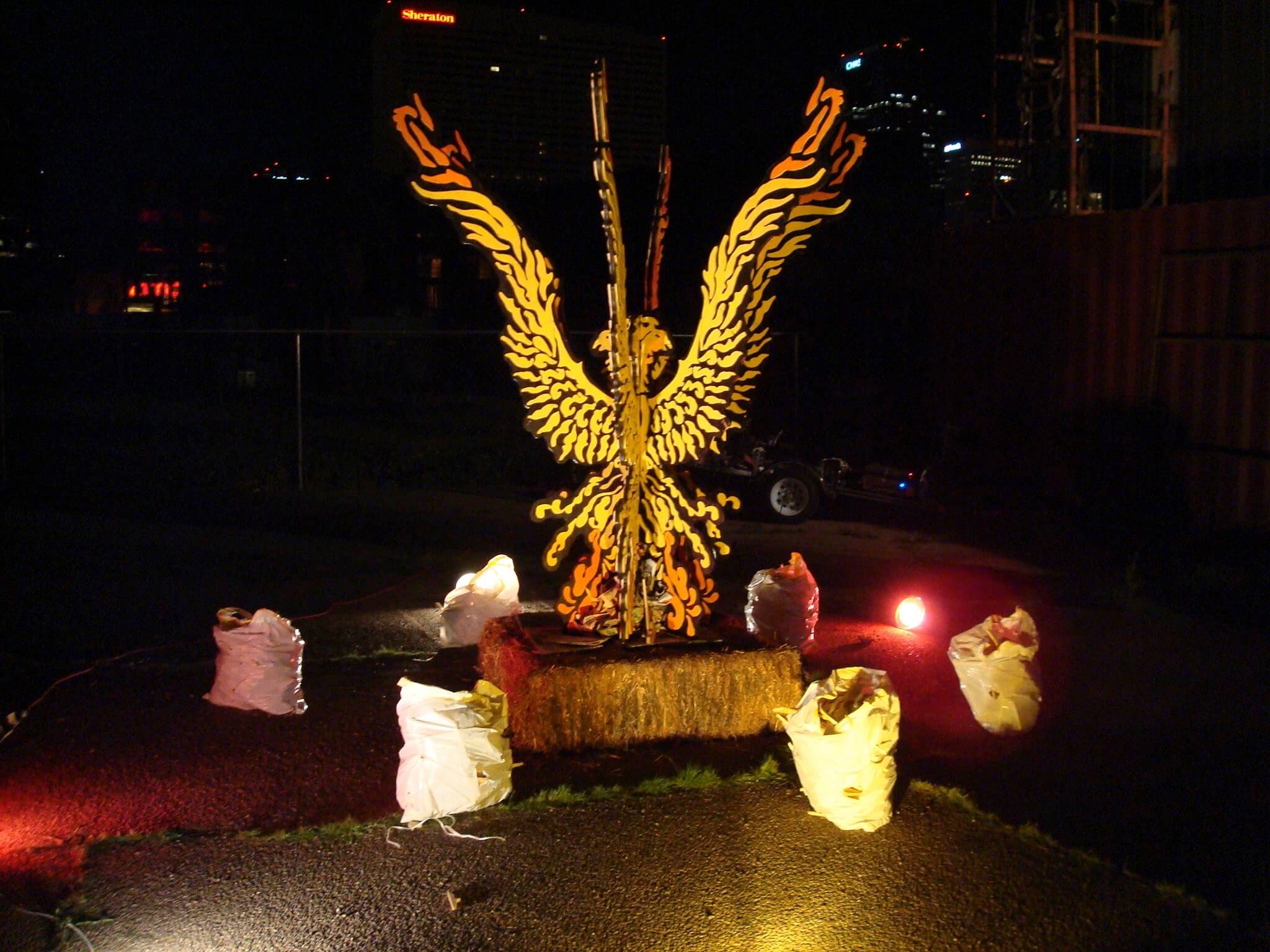 The Chaos System is not a capitalist endeavor. The idea behind getting a more permanent home for the system is more about giving access to high quality sound related things to the rest of the people who would otherwise never be able to afford anything like it. I’d like to create a community space where a lot of small economies could be built and where people can come to have an alternative to a world which seeks to sell you your value instead of fostering environments where value is created through connections with others in social and creative ways. The goal would be to have people with money who want to invest in a space where they can come to be involved in developing all kinds of human creative endeavors, and people on the bottom rungs, middle rungs, and top, can have all of the kinds of things they love to do available for others to purchase or learn to make themselves in a fully inclusive way.

Imagine a place where there are workshops for all kinds of creative ideas… Where resources are shared between a bunch of people instead of isolated in some rich persons studio and only used by them, or cost so much that it can’t be justified. A place with jewelry classes, metallurgy, a kiln and all things ceramics, sewing, art classes, electronics, wood working, screen printing, graphic design, video editing and live video mixing, web design and development, fabrication, fire performance, belly dancing, poi, martial arts, food preparation with a commercial kitchen, food growing with traditional and advanced small format farming, small business development (in context), full performance venue for many kinds of expression… Really as much as a community of people can think of to teach, share, and express.
My part would start with having my equipment available for the kinds of live music and other performances that give people a place to escape. But also eventually teaching how to run live sound and understand audio equipment. After i manage to figure out how to save up for the full live setup i’m building toward, i’ll then save up for a full tracking and mixing studio so people can get their songs and albums made to a standard that would otherwise be out of their reach to afford. While of course we want to be able to fund all of this with cash, capital comes in many forms, one of the biggest being through the volunteerism that makes this kind of thing possible. Then finally i want to build a mastering studio along with the mixing and tracking studio, so that skillset and any profits from that service are not ending up in the pockets of people who only want to profit from it without adding other kinds of value, and the product is at the highest of standards available.

The idea is to create a lot of avenues for making actual money, as our greater system of living requires it. But the real value proposition comes from having a real community to connect with, not just some word that means the people you live near but only talk to when a storm blows a bunch of people’s roofs off. Generally in this society that comes through places like churches primarily, but i’d prefer to avoid dogma, ideology, and superstitious crap, especially when the consideration of making some profit comes into the equation. People will believe whatever they will, but i don’t want that belief becoming any part in the DNA of the vision.

All of the ground floor stuff could probably be put together in short order, and be allowed to emergently grow. We have enough people interested, i’d wager. The issue is how to fund the basics and get people into understanding the real value proposition so they want to spend enough through something like my Patreon to float everything while the rest is built. It would probably require a non-profit legal structure as a part of side stepping anything becoming managed in a top down and capitalist way. I’m not looking to create a vision based on profit that only benefits a few people, and leaves the rest at the whim of that kind of top down thinking that creates the alienation they are already looking to get away from. The point is to have a space where that doesn’t exist, and interdependent connection creates a value proposition that cannot be bought, sold, or taxed. Basically a rejection of the current paradigm, but in a way that still creates income streams so people aren’t losing capital in the process of building the space.

Basically there are already a bunch of people who really want something like this. But getting higher level funding to float it till it becomes self sustaining is the trick to be figured out. What i do know is that i am not the person to organize and “manage” such a thing while it is starting (or at all really). But i do bring a large skillset to the table to make it doable. Whatever power i do want would have mostly to do with keeping others from building up their power to the point of having too singular an influence and the structure reverting to something that doesn’t foster a collective energy where a real bottom up democracy of ideas and energy are cultivated. People are so inured by the greater society and the structures it tries to say are “the way” things should work, that it will be necessary to keep a check on that to keep it from happening.

My purpose at the moment is to keep upping my game with audio stuff while doing web development, design, and some management for BASSBOSS to help it grow enough to help me keep funding building my resources so i can keep adding them to the portfolio of equipment to add to the vision. Also hopefully to get the attention of someone who gets it and has a bit of capital they can spend to help build up The Chaos System so we can have a serious place that contends with the best on offer anywhere. My Patreon is an experiment in how this will eventually be presented. How i have it is very rough, but will build a framework for a better presentation to get people investing. I’d definitely want someone to rewrite everything so it reaches a greater audience and doesn’t carry my energy and bias’ with it.

Basically it comes down to the realities of a world that is collapsing, sells alienation as gold, and profits off of sickness; while bankrupting people through an educational system that gave up a long time on actually trying to help advance conscious development, and is now focused on teaching the skills of conformity to a system that imprisons people who participate. I want to foster the kind of interdependent connection that gives people a place to feel like there can be real purpose, and where real skills can be learned, taught and developed, in ways that just aren’t available anywhere else that works according to the established capitalist narrative, and, depending on how fast we get financial and environmental collapse, offers a real community that can be depended on when the statist structure loses it’s power to support and “protect” the people it has made slaves to it. So that when all of the infrastructure fails, there is already a bunch of connection there that people can rely on to build their own thing without any need to depend on broken systems of power currently in place.

Also, i’m not the only one trying to do this in this way. But finding others in different places who are is a bit difficult. And building the structures that make it fully real and self sustaining takes a kind of understanding that isn’t easy to get a lot of people to see. We have one such development already being built in Miami Arizona, by the same people that facilitated The Firehouse along with other previous incarnations. There is a deep need in people for these kinds of connected structures, but often people have a hard time understanding the value until they actively build within it. Then it’s plainly obvious what the value proposition is. This is why i mention that all the actors needed for the bottom levels are essentially already there, also wanting a space to build in. And to clarify, by “space”, i don’t mean that it requires one location for all, or that a location is what is required to hold on to to make it real. At least not in a permanent way. If all the pieces are in place, it can always move. In a place like Phoenix, locking in an actual property and holding on to it in a way that doesn’t just gentrify the area is almost impossible, so we’d want a strategy to keep this from happening, deliberately. In a place like Miami, gentrification through emergent culture building is actually a good idea (as long as attempts to dissuade codification of culture are made), where they need revitalization. So how the vision works and where and why, changes based on context and need.

So in conclusion… The point in what i do with the resources i have and the way i save to build is in all ways meant to create the ways in which i can help this idea. I don’t want to sell my resources to the ones who can offer me the most capital, excluding the ones who are always using the crappiest, cheapest, hand me dow, falling apart, mediocre equipment available. I want this to all be a part of building something that enables as many people as possible (probably with the limit around Dunbar’s number) to have the best resources and access while building interdependence, and find others with more monetary capital who want to help fund that by understanding the whole value proposition it offers. I need others to help me get that vision across and pull in those kinds of people. Not to simply sell them an investment that will build their money portfolio alone, but to build an organic (non codified) sub culture that gives them the kinds of interactions and creative opportunities that make life truly fulfilling.

The current societies we live in do not have this to offer. But we can build it.